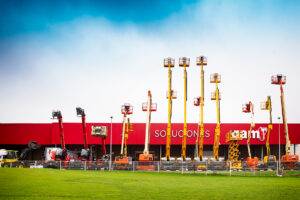 Spanish multinational firm GAM (BME: GALQ), a company specialising in solutions for industry, has just presented its results for the first half of 2022, in which turnover increased by 39% to 107.4 million euro and net profit was 2.4 million euro, compared a 0.8 million euro loss in the same period of the previous year. EBITDA margin was 27.5 million euro, rising 52%, and representing 26% of sales. Growth was double-digit in all business lines. 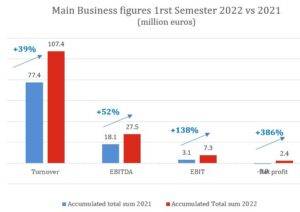 Thus, sales for recurring services (long-term) increased by 61% to 23.2 million euro. The contracted portfolio, with average cycles of four years, increased by 71% compared to the same period in the previous year, having contracted an additional 36 million euro in this type of service in 2022.

The rental business (short term), which was most affected by the pandemic, has recovered with asset utilisation rates similar to 2019 and with 35% growth to 43.5 million euro.

Businesses without Capex (in which additional investment is not required, such as distribution, training, maintenance and purchase and sale), increased by 32% to 40.8 million euro. The greater weight of these businesses led to EBIT increasing by 138% and almost quadrupling net profit. 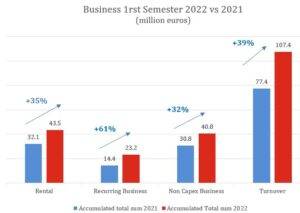 Added to the problems generated by supply chain difficulties, which persist and are expected to continue during the second part of the year, are increased costs caused by inflationary pressures. Despite all this, the company achieved high levels of growth and improvements in profitability. The EBITDA margin thus improving by 2.2 points to 26%.

During the first six months of 2022, GAM has continued with its inorganic growth strategy and has acquired Grupo Dynamo Hispaman (GDH) and Grupo Intercarretillas. The company has thereby strengthened its position in recurring businesses, maintenance and distribution in Iberia and is now the main dealer of the Hyster®-Yale® brands in the territory.

Additionally, and in relation to its sustainable mobility business for the last logistics mile, the company Inquieto, GAM has added De Lage Landen (DLL) as a partner, a financial institution belonging to the Rabobank Group, which specialises in asset financing, acquiring a 20% shareholding in this firm. Thus, the project has a leading financial partner in the sector, to promote the development and growth of this business.

Despite the high growth, the company maintains an indebtedness level similar to that at the end of the 2021 financial year, and a comfortable liquidity position.

«In a complex environment marked by inflationary tensions, cost increases and problems in the supply chain, the company achieved high growth in all business lines and improved profitability, which means that it can be optimistic about the second half of the year. The company’s roadmap set out in its Strategic Plan therefore remains intact, although with caution -mainly due to the complex and uncertain situation-, but with its renowned ambition and commitment that is characteristic of all the people who work at GAM,» said Pedro Luis Fernández, Chairperson and CEO of the company.